As an engineering solutions company, Protectoseal is the industry leading manufacturer of environmentally sensitive safety products. Constantly evaluating the needs of industry, we strive to deliver products and services tailored to the unique requirements of our customers worldwide. Our goal is to continue offering the broadest range of products supported by a best-in-class, global customer service organization. Since our founding in 1925, the company’s dedication to innovation and commitment to safety is and will continue to be our driving force into the future. 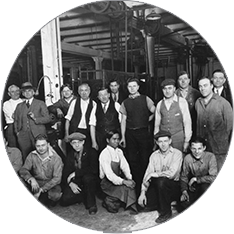 Manufacturing environments in the 1920’s were vastly different from today’s modern, efficient and highly regulated facilities. Most had overhead line shafts and creosote wood floors saturated with oils and cutting liquids and few, if any of these facilities had sprinkler protection. Gasoline, naphtha, kerosene and carbon tetrachloride were common cleaning agents. Most were potential fire hazards and all released harmful vapors into the atmosphere endangering employee health.

R.J. Anschicks, the founder of The Protectoseal Company, realized early on that the safety of a manufacturing company’s workforce and the prevention of losses through fire damage were paramount to its success. So he adapted the technology of the Davy Miner’s Lamp, which involved the use of a perforated metal barrier that prevented a vapor mixture from combusting, to create what became known as a “flash arrester”. This principle was applied to the development of containers specifically designed for the safe storage and handling of flammable liquids.

In the 1930’s, further innovation led to the manufacture of a line of fittings that incorporated a similar concept used to protect large petroleum and petrochemical storage tanks from fire and explosion. From the design of the flame arrester vent, Protectoseal expanded into tank breather vents, providing controlled pressure and vacuum relief, and other related tank safety equipment. For the first time this allowed the installation of safety devices on storage tanks which had previously been left almost unprotected. In addition, these new venting systems helped reduce product loss by retarding the evaporation of stored liquids. Protectoseal quickly became the industry leader in vapor and flame control equipment.

Public awareness of environmental issues and the development and enforcement of “clean air” regulations fueled rapid growth of the company. In recent years, Protectoseal has taken a strong leadership role in promoting the safe operation of vapor recovery systems. Active participation in the drafting of international, industry-wide regulations, focused research and testing and the development and marketing of products such as detonation flame arresters and tank blanketing valves were all aimed at solving customers’ tank safety problems.

Protectoseal remains committed to on-going product innovation and outstanding customer service. Consider our design for safety fuel caps for large spark ignition engines, products that were specifically designed to meet stringent new environment requirements, while providing an industry leading level of operational safety. It’s the perfect example of why our motto “Safety Without Compromise” is your assurance that Protectoseal truly is dedicated to protecting your facility and personnel, and why we continue to be the leading safety products manufacturer in the world.

The Protectoseal Company will be the premier quality and value supplier in the industries we serve. The safety of our employees and our customers is our highest priority. We will treat all those with whom we interact professionally and respectfully. Protectoseal is committed to meeting applicable requirements and our goal is zero defects. We will achieve this by using a process driven approach and continuously improving our performance.

“Protectoseal’s selection of Detonation Flame Arresters offer smaller pressure drops than those of its competitors. Over the past few years, we have installed these on all new vapor recovery systems.”